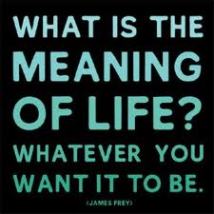 Meaning-making is a powerful theme in existentialism and yet its definition varies from one philosopher to another. What all existentialists agree upon, however, is that all human beings search for meaning and personal identity in their lives.  Jean-Paul Sartre (1965/1993) described existentialism as a movement “to make every man aware of what he is and to make the full responsibility of his existence rest on him” (p. 36). He meant that all human beings try to find meaning in a world that is meaningless. They do this by creating various religions to support their beliefs about a potential life that exists beyond material existence.  Sartre, obviously, was an atheist. He believed that human beings create artificial concepts through self-serving illusions and that these created constructs are not truly meaningful because absolute “meaning” does not exist at all. For Sartre, life and death were both considered meaningless – it is meaning-less that we live and it is meaning-less that we die, and because of this daunting fact, people must make their own meaning by what they choose to do in life. This happens through the intentions and interactions they have in the world.

Victor Frankl did not agree with Sartre’s interpretation about meaning-making at all. He believed that true meaning existed in life and that human beings could find meaning through suffering and through life experiences.  By having a will to live through adversity, human beings find meaning.  He truly believed that meaning was ever-present in the world and that the primary mission in life was to find meaning.  In finding meaning, a person needed to step outside of him or herself – what that meant for Frankl was that meaning-making was not introspective at all but transcending.

Like Frankl, Søren Kierkegaard also believed in suffering as a means to make meaning. He proposed that individuals had to suffer despair throughout their lives, but he emphasized the necessity to move beyond the idea of human existence, which he believed was deficient. Kierkegaard believed in faith, but he stressed that doubt was the rational part of a human being. For Kierkegaard, individuals needed to doubt to have faith because, without doubt, faith had no value. Faith in God would be meaningless without first having doubt about the existence of God. For him, we needed to doubt to have faith and faith to make meaning.

While Frankl, Sartre, and Kierkegaard emerged from immensely different personal belief systems, all three of these philosophers represented existentialism through their world views and their personal beliefs. This just demonstrates  how appropriate and crucial it is for counselors to first construct a personal understanding of meaning and human development before using existential concepts in the counseling relationship.